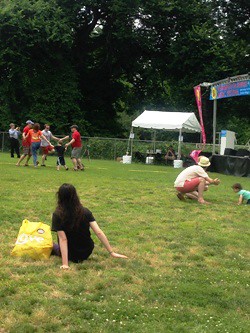 The 15th Washington Jewish Music Festival is winding down this weekend, hopefully with better weather than we’ve seen these last few days. I’m fortunate enough to have attended on a balmy day last Sunday, which was more important than usual because it was an outdoor event. I dropped in for the last hour of WJMF in the park (Francis Field, to be exact.)

Primarily geared toward children, the event included an inflatable slide and bouncy castle, plus a tented off area of arts and crafts. Musical groups Josh and the Jamtones, The Mama Doni Band, and Michael Winograd’s Klezmer ensemble performed; I was lucky enough to catch the last act. Near the stage, a small but lively crowd danced, and the music carried all the way across the park, bouncing off of nearby buildings. It was pretty cool to hear Jewish music filling up a big, public space in DC. Really made it feel like a cultural pride festival, and it was a fun way to spend the afternoon.

The event was co-sponsored in part by Charles E. Smith Jewish Day School, Ohev Sholom, and PJ Library. The Elona Ruth Shaffert Fun, to support WJMF in the park in honor of a former DCJCC employee, is being established.

The festival concludes this Saturday. Click here for more information.