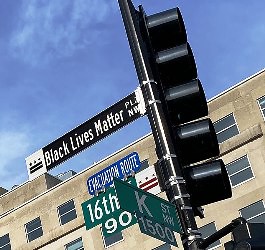 In the aftermath of George Floyd’s death, and during action to protest police brutality against Black people, the Jewish community has mobilized. I’ve been watching from the sidelines, still quarantined in Silver Spring. Luckily, social distancing means more virtual expression. Check out these events, past or present!

I’m largely focused on Adas Israel, since I’m a member there. On June 5, my senior rabbis joined the Washington Interfaith Network for this press conference on racist violence, and challenging the gentrification that forces people of color from the city.

Rabbi Aaron Alexander offered this in his opening prayer:

We consciously decided, embedded, even legislated liberty and justice for some, but not all. And too many of us still decide, every single day with the choices we make, the money we spend, the space we claim, the land we develop, the people we displace, the wages we steal, the rods and staffs we wield, we somehow keep saying that your enough is enough for me, but not for all of you. And so, I am here, God, on behalf of, with the permission of, while asking forgiveness from my brothers and sisters behind me, to say enough is enough.

That evening, for Kabbalat Shabbat (which I’m linking to even though it feels sacrilegious, then again, the video is archived, right? :P), Adas hosted Ilana Kaufman, director of the Jews of Color Field Building Initiative.

Most Jewish spaces in America were created by and largely cater to white Ashkenazi Jews. Among other topics, Kaufman implored those congregants to not see themselves as separate from Jews of Color.

Our narrative and our history in the United States is the Jewish people who somehow presented as all white. And the story that we captured of presenting and being all white, I want to suggest that’s the anomaly. It’s such an important chapter of our history, but really no time in our 5,000 years have we thought we were all white. Or have we all operated just white Jews and Jews of Color. And so, we have learned this behavior of separation from this country. And this moment is inviting us to learn the behavior of coming back together.

In upcoming events, on June 25 and July 2, Sixth & I is hosting a Racial Justice Reading Group. They will be discussing The New Jim Crow by Michelle Alexander.

June is also Pride Month! Although the Capital Pride Parade has been postponed, on June 19 the Edlavitch JCC is hosting a Virtual Pride Shabbat with various Jewish LGBTQ+ organizations. Bet Mishpachah Rabbi Jake Singer-Beilin will be co-leading.

I’m grateful to the DC Jewish community for this light in the darkness! Stay safe, everyone.

Several months ago, shortly after High Holidays, in fact, Adas Israel launched a new series of innovative learning programs, largely for adults, in their renovated beit midrash (study center.) These monthly programs revolve around a theme, and include lectures, panels, screenings and more in what they hope will be more of a 21st century, “coffee house” environment. This month’s theme was justice, and I figured it was time to review some events.

“Justice” is a rather versatile subject and Adas embraced many aspects—from Rabbi Steinlauf’s exploration of the mitzvah of tzedakah to the reading of a play on interfaith conversations. In keeping with the 21st century gestalt, I decided to zero in on two events that were about including marginalized groups in the modern Jewish community—LGBT and people with disabilities.

Studying Jewish religious texts through “a different lens,” as presented on our handout / photo taken by Rachel Mauro

Dr. Jay Michaelson, who recently published the book God vs Gay? The Religious Case for Equality, was the keynote speaker on Tuesday, Feb. 4, who sat down with Rabbis Steinlauf and Holtzblatt to discuss progressive advances in the Conservative Jewish community, issues LGBT people face when approaching Jewish communal life, and even a thoughtful, broad-minded stance on the issues facing Orthodox groups.

My favorite part was breaking off into traditional Jewish study groups of 2-3 called “chevruta” where we provided with biblical verses about gender, specifically as it applies to the patriarch, Jacob. We also had access to quotes from scholarly thought on these passages, ranging from the modern to a surprisingly homoerotic interpretation in the Zohar of Jacob wrestling with the angel. Our concluding group discussion touched upon how ideas of gender and sexuality are intertwined, among other things. Certainly more useful for a longer, more in depth series of study sessions, but the evening was a great way to get our feet wet! The event was presented in partnership with Bet Mishpachah, Nice Jewish Boys DC and Nice Jewish Girls DC.

On the Shabbat of Feb. 22, I attended a more insular event on making the synagogue and community more accessible to people of varying disabilities. Rabbi Feinberg officiated over a panel of five congregants advocating for various physical and intellectual issues, plus the director of the Interfaith Initiative of the American Association of People with Disabilities. It was a good chance for this smaller cache of members to take stock of what they as a group had accomplished and what they had left to do, broadly speaking. I enjoyed getting the chance to hear from a diverse group of people about their experiences in the Jewish community at large, and their hopes for Adas specifically.

Justice month wraps up with another biblical class this Wednesday, Feb. 26, about divine justice, in conjunction with the Foundation of Jewish Studies. Next week brings a new month and a new theme: Israel. Check out the programming here!