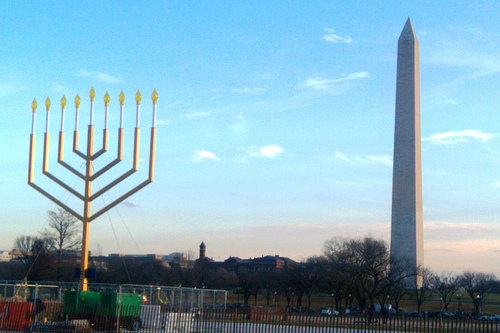 Jewish life in the capital began in the 1840s, with the arrival of German immigrants, according to the Jewish Virtual Library. Most German Jews were of the Reform denomination, and in 1852, a group of 21 people established The Washington Hebrew Congregation. Eleven years later, finally backed by Congress, they were able to purchase property on 8th and H streets, in what is known as Chinatown. The congregation, still functioning today, is now located in Cleveland Park.

The first D.C. property, which was actually built to be a synagogue, is now The Lillian and Albert Small Jewish Museum, (click on the link to see a 1969 photo of the building moved by dolly to its new location in Chinatown, in order to make way for the Metro transit headquarters.) It was founded as a Conservative congregation in 1876 by 35 members of WHC who were less thrilled with the synagogue’s more liberal practices. The Congregation, Adas Israel, moved two more times—to an ornate lot at 6th and I streets in 1908, and then to it’s present location in Cleveland Park in 1951.

The entrance to Sixth & I Historical Synagogue. / photo taken by Rachel Mauro

The property at 6th and I, sold to a Black church in 1951, was relatively forgotten by the D.C. Jewish community until the church decided to move in 2002. Jewish philanthropists Abe Pollin, Shelton Zuckerman, and Douglas Jemal, pooled money together in order to re-buy the historic synagogue (re-dedicated in 2004 as Sixth & I Historic Synagogue.) Though no longer a traditional congregation with dues and a rabbi, Sixth & I provides a wide range of religious and cultural programming, and brings young Jews back to Chinatown for the first time in decades.

Ohev Shalom, otherwise known as the National Synagogue, became the first Orthodox-chartered synagogue in Washington in 1886. Since then, many more of all denominations have followed. Click here for a list of synagogues in the D.C. metro area.

A banner in front of Hillel's international headquarters bears Chinese symbols obligatory of all signs in Chinatown. / photo taken by Rachel Mauro

Although most Jewish American headquarters are located in NYC, D.C. has the particular honor of housing B’nai B’rith International and it’s numerous offspring, including BBYO, Hillel, the Anti-Defamation League, and Jewish Women International.

Today, the greater Washington area is known as the sixth largest community of Jews in the United States, according to the Jewish Virtual Library. Several synagogues, including Orthodox, Conservative, and Reform, have taken hold here, as well as non-denominational minyans and special interest groups. Though the town is largely transient, due to changing political parties and a revolving door of young professionals, the Jewish community is here to stay.