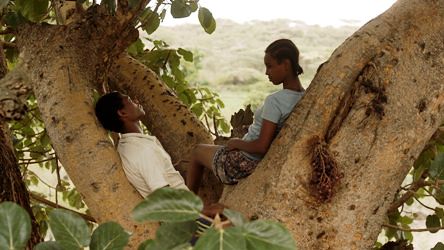 Israel has long been seen as a refuge for world Jewry. In Aäläm-Wärqe Davidian’s feature debut, she moves away from the Ashkenazim, Sephardim and Mizrahim of Europe, North Africa and the Middle East, and focuses the attention on Ethiopian Jews.

Fig Tree aired between Nov. 1 and 14 in the newly constructed Cafritz Hall movie theater as part of the Edlavitch Washington, DC Jewish Community Center’s JxJ yearlong programming. A loosely autobiographical story, it concerns itself with teenage Mina (Betalehem Asmamawe), a Jewish girl trying to save her Christian boyfriend Eli (Yohanes Muse) from army conscription while her own family attempts to flee to Israel.

The year is 1989 and civil war has been ranging in Ethiopia for all of Mina’s lifetime. Young men and boys are dragged off of streets and out of schools while men with megaphones yell propaganda about how they should be proud to serve their country. Eli often finds refuge in the titular fig tree, where he and Mina both play and flirt with more mature desires.

Asmamawe’s performance is the most evocative part of this piece, as she ranges between subterfuge and terror when it comes to the external army-driven plot, and mischievousness and betrayal when it comes to her personal plot. One of the most arresting smaller moments of the film was when she pressed down on the dial tone while on the phone with her erstwhile Ethiopian-Israeli mother, still pretending to speak to her for her grandmother’s benefit.

Mina’s grandmother (Weyenshiet Belachew) is a formidable lady, running a weaving business that gets the attention of much wealthier clients. She also takes Eli and his mother in under her wing, and spearheads the covert operation that will reunite her and her grandchildren with her children in Israel. This requires handing off money to a travel agent/extortionist who may or may not place Eli with a Jewish family to secure his own trip there.

I’ve watched a fair amount of foreign and indie films throughout the years, and I expect to see a degree of minimalism. But Davidian straddles the line, given the geopolitical backdrop and sense of urgency to the piece. She doesn’t give into an overwrought Hollywood musical score, but foreboding dreams and a fair share of violence makes this film feel more familiar to me as an American viewer.

Said politics, it should be noted, are not explained in much detail. We the audience are not given a crash course in Ethiopia’s history or Israel’s covert actions there (Davidian and her family were airlifted in Operation Solomon in 1991.) But one hardly needs it to empathize with the sense of danger present on screen.

It’s a very dark film, including with reference to physically amputated and mentally traumatized soldiers. But it doesn’t lack a certain hope in striving for a better future, either. Davidian returned to Ethiopia in 2016 to film with local actors in this beautiful African cultural landscape.

Fig Tree was nominated for 5 Ophirs (the Israeli Oscars) and it won for best cinematography. It also swept up awards at the Atlanta Jewish Film Festival and the Toronto International Film Festival. Click here for more information. And you can find my similar content and movie reviews under the Books, Plays, Music and Movies tab!