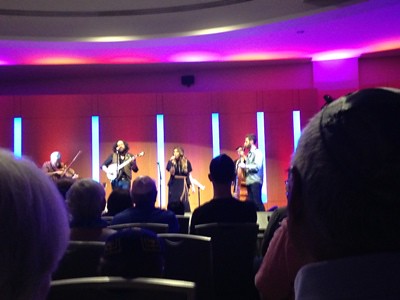 Normally this is the time of year when I write out a little something about the Jewish history of the countries being honored at the Smithsonian Folklife Festival. But the Folklife Festival is doing things a little differently in 2019.

For one weekend (this one) only, they are staying close to home with programming and performances to honor the DC music scene. Titled “The Social Power of Music,” the event plans to “celebrate the power of music to entertain, educate, inspire, preserve history, strengthen identity, and build community,” according to the website.

So I had to go back to the drawing board to think up a Jewish angle on this. 😛 But it also felt like something was staring me in the face. Music plays a big part in lots of Jewish DC organizational programming. Back in May, I highlighted klezmer bands playing Yiddish cinema music as part of the EDJCC’s inaugural JxJ festival. Then, just last Shabbat, the bluegrass (or “jewgrass”) band Nefesh Mountain played and workshopped at Adas Israel.

I attended their post-Shabbat concert, along with dozens of other people, on Saturday night. Melding bluegrass instrumentals and vocals with Jewish influences, they sang originally produced songs off of their new album such as “Bound for the Promised Land” (with new biblical allusions) and “Eretz Reel” (an amusing play on words.) They also played the haunting “Tree of Life,” written in response to the Pittsburgh synagogue massacre last year, with lyrics available for free on their website. Samples of their music are also available on their YouTube channel.

Husband and wife team Eric Lindberg and Doni Zasloff provided main instrumentals and vocals, with regular band members Alan Grubner and David Goldenberg joining them on fiddle and mandolin. By the end of the concert, people were dancing around the room, and then the group led us in a soulful Havdalah to officially end Shabbat and welcome in the new week.

It’s heartening to know how Jewish groups can find a home in American music while still honoring our shared roots. Hence drawing back to the Smithsonian Folklife Festival–culture through hybrid sound and diversity. For more on the Folklife Festival, taking place tomorrow and Sunday, click here! They should be back to their more traditional programming in 2020.