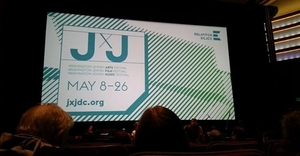 The Edlavatich DCJCC wrapped up its inaugural JxJ arts project yesterday, a two and a half week mashup of their film festival, music festival and “hybrid” cultural events.

I decided to attend one of these hybrid events last Thursday evening, when Isle of Klezbos and Metropolitan Klezmer performed Music from Yiddish Cinema at AFI Silver Theater. The event included vintage film clips, mostly from the 1930s, as well as live accompaniment.

More accurately, the band performed personalized renditions of various songs featured in Yiddish films. These included a mournful ensemble quartet in Yidl Mitn Fidl and the more upbeat wedding song from Uncle Moses, among others. I usually found their pieces to be more jazzy than the originals; featuring more instruments, like drums and the piano, and fewer staccato notes. It was a fascinating dive into the evolution of musical expression. And the group had a great fusion sound, too!

Percussionist and film archivist Eve Sicular also shared insights into the subtext of various musical clips, for example pointing out the influence of tuberculosis in one of Molly Picon’s Mamele numbers, and the inside references to homosexuality in Americaner Shadchen. She also detailed highlights–some known and some suppressed by the Soviet Union–of Russian-Jewish actor Solomon Mikhoels. But with the event spanning almost three hours by that point–and on a weekday night no less–a little tedium started to settle in as Sicular read long excerpts from a memoir on the subject. Several people in the audience left early. But before that there was clapping and laughter in response to both these clips and the live music.

Overall, Music from Yiddish Cinema opened the door to the complexities of this genre, and served as a reminder that the past was as vivacious and full of life as the present. For more of a taste of this musical group’s hybrid flavor, click here!