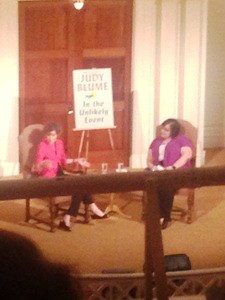 On Thursday, June 4, Judy Blume came to Sixth I to talk with NPR’s Linda Holmes about her new, adult novel, In The Unlikely Event. Several weeks later, on Monday, June 29, newly minted Fig Tree Books, which seeks to publish novels, memoirs and more that chronicle the American Jewish experience, brought three of its authors to Kramerbooks for readings, signings, and schmoozing.

These two events were as different as night and day, except that I faced travel problems with both. 😛 The first was entirely my fault; I completely underestimated the timeframe necessary for a Judy Blume night. Although I arrived in time to hear her speak, I was so near the end of the line that I had to squeeze into the balcony and wait over an hour to get my book signed, missing the chance to sit with my friend, who wisely arrived around 45 minutes before I did. 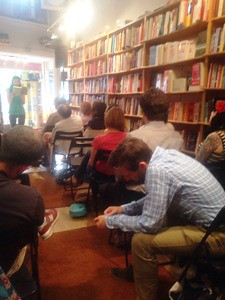 I didn’t face the same issues with crowds at the second event; I faced them en route. Monday turned into one of those unfortunate days where the Red Line got majorly backed up; Metro Center was over-teeming with people, and trains were barely getting out. I ended up leaving the station to journey the 1.5-mile distance to the bookstore by foot. It was a lovely day for it (unlike the torrential rain of June 4), except that I arrived about half an hour into the event.

The Judy Blume event, or #BlumesDay, as we were encouraged to refer to it on social media, was co-sponsored by Politics & Prose. We were ushered into the social hall to pick up our books and tickets for signing; Blume autographed almost 600 books that night, and personalized them by name, too. Upstairs, we listened to the ‘50s soundtrack of songs referenced in her new novel, based on true events from when she was a child and three planes mysteriously crashed over the course of weeks in her hometown. Blume talked for around an hour about the process of writing this book, her legacy among generations of primarily female readers who grew up with her, fighting off censorship for her frank discussion of sexuality, and more.

Two of the writers at the June 29 event were first time novelists; Jessamyn Hope with Safekeeping and Jonathan Papernick with The Book of Stone. Also in attendance was Alan Cheuse, of NPR’s All Things Considered, who published his sixth novel, Prayers for the Living, with Fig Tree Books. The three authors read from their books, and then fielded questions from the 25-person audience. We may have been small but we were also intimate, getting the chance to talk with the writers after the event. I bought a copy of Hope’s Safekeeping, which she signed for me with a personal message after we gabbed for a few minutes.

This habit of acquiring signed books can err on the expensive side, but it’s quite worth it, too. Summer is a great time to curl up with a good book in good weather, and if you need a break from the DC humidity, Jewish organizations and indie bookstores have a lot of literary events going on. Check them out!